Asherwood Estate: A Gift for the Ages

Last month’s announcement that the 107-acre Asherwood estate, formerly the home of Mrs. Bren Simon and her late husband Mel Simon, had been gifted to the Great American Songbook Foundation (GASF) sent shockwaves throughout the city and enthralled GASF fans.

Mrs. Simon gifted the renowned estate, including the personal property contained within (valued at more than $30 million), to the Foundation, which will leverage the donation toward its goal of creating a freestanding Great American Songbook Hall of Fame Museum. Founded in 2007 by five-time GRAMMY® Award nominee Michael Feinstein, the Foundation seeks to inspire and educate by celebrating the Great American Songbook – the timeless standards of pop, jazz, Broadway and Hollywood.

Headquartered at The Center for the Performing Arts in Carmel, the Foundation advances this rich legacy by curating physical artifacts of its creators, performers and publishers; operating a multimedia exhibit gallery; overseeing the Songbook Hall of Fame; offering programs for the public and research opportunities for scholars and artists; and providing educational opportunities for student musicians, including the annual Songbook Academy® summer intensive. The Foundation is a Cultural Affiliate of the Los Angeles-based GRAMMY® Museum.

The Asherwood property is now poised to be a potential museum site and as the basis of an endowment to support the Songbook Foundation’s mission. No longer occupied by Bren Simon, it includes a fully furnished 50,000-sq. ft. main house, an 8,000-sq. ft. clubhouse, a 6,000-sq. ft. guesthouse, several other structures and two golf courses. The estate is managed by a staff of nine individuals, five salaried and four hourly staff members. All nine staff members have been hired by and are employees of The Center for the Performing Arts and Great American Songbook Foundation.

According to The Center’s CEO and President Jeff McDermott, “We are making great efforts to integrate the estate’s staff into our team. We’re going to be holding several meetings, committee and board meetings, from both organizations and will be utilizing Asherwood estate and the main house as much as we can for those purposes. It allows our staff here and board members to get to know the property and facility and start to make it feel like our home.”

Bren Simon offered a statement on her years at the renowned estate: “During my time at Asherwood, my fondest memories were when we welcomed guests into our home and hosted events to support causes we care deeply about,” Simon said. “I am so pleased that Asherwood is now transitioning into a place that will support the Great American Songbook Foundation and be seen and used by the Foundation, its guests and the public at large. I can think of no finer use than for Asherwood to become an asset to the Songbook Foundation and to support the mission of celebrating American music.”

The Songbook Archives and Library, with over 100,000 items, is second only to the Library of Congress as a repository of documents, recordings and other artifacts from the 20th-century heyday of the Great American Songbook. The holdings include personal papers and other pieces from legendary performers and songwriters, including Meredith Willson (“The Music Man”), Johnny Burke (“Swinging on a Star”), Gus Kahn (“It Had to Be You”) and Hy Zaret (“Unchained Melody”). The collections, which attract musicians and researchers from around the world, are currently stored at a facility near the Palladium concert hall where the Foundation maintains its offices and a public exhibit space.

Last July, the Great American Songbook Foundation was named a Cultural Affiliate of the Los Angeles-based GRAMMY® Museum. Cultural Affiliates collaborate on exhibitions, educational initiatives, research programs, internship opportunities, technical support and more. The GRAMMY® Museum is among the entities providing expertise and assistance to the Songbook Foundation in its museum planning.

The Foundation staff and board began the work to evaluate the many possibilities for the use of the donated property, starting with a comprehensive feasibility study that will be steered by an appointed oversight committee.

McDermott spoke with us about the purpose of the oversight committee and the process of evaluating the best use of the gifted estate by the Foundation.

“The oversight committee will be appointed by the chairs of both boards, Melissa Stapleton Barnes and Eric Payne,” he said. “The staff has made some suggestions as to who we think would make well-suited members of this committee. We are blessed to have people from both boards with great business, financial, legal and arts acumen who will help guide this process.”

In terms of whether or not a Great American Songbook Hall of Fame Museum will take up residence at Asherwood for certain, McDermott stated, “It is certainly a possible use of the property, and there are many other possible uses of the property. Certainly, it has always been a dream and goal and is actually a part of our 2020 strategic plan for the Foundation to have a free-standing interactive Great American Songbook Hall of Fame Museum. Mrs. Simon’s generous gift has shot us forward years towards our ability to establish that goal. We are doing our due diligence, hiring consultants and looking at the possible uses of the property in a variety of ways, including a possible site of that museum. It is very fair to say that no decisions have been made yet, but we won’t let dust settle too long as we will be reviewing all of the options that this asset gives us.”

Chris Lewis, Executive Director of the Great American Songbook Foundation, emphasized that the gift of the estate is a “game-changer” for the organization. “It comes with great accountability,” he emphasized. “We will proceed very deliberately and strategically to maximize its value as Mrs. Simon intended. We also recognize the interests of the residents and property owners in the area, and their input will be very important.”

Lewis continued, “My mantra is the possibilities are endless. There is so much potential, from the Great American Songbook Academy to the archives. Making the announcement was the first big step, and now we are working to figure out how to best utilize this property. We feel that this gift gives us opportunities that are beyond our comprehension, and we are really excited.”

Michael Feinstein, the founder of the Great American Songbook Foundation and artistic director for The Center of the Performing Arts, spoke remotely on the day of the announcement and shared his thoughts and goals for how the estate may be utilized by the Foundation. 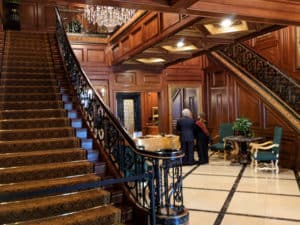 “This is a vision and a goal that none of us could have ever dreamed of,” Feinstein said. “That’s how life happens sometimes. We have an idea or a thought, and another thing occurs in our lives that we could’ve never expected and creates a sea change in what happens in our journey. Certainly, that has happened today for the Great American Songbook Foundation. When I first saw Asherwood, all I could think of was Xanadu in ‘Citizen Kane.’ You know that overwhelming experience of beauty, grandeur and possibility that comes with this amazing edifice.”

Feinstein concluded, “This is a gift that is so extraordinary for the Foundation because it gives us the possibility and opportunity to do so many things that otherwise would’ve have taken us many years to accomplish. In the decade since we founded the Songbook Foundation and Archives, we have been driven primarily by the challenge of preserving this musical history – literally a race against time in many cases. Now, thanks to this gift, we can look forward to a future of endless possibility.”