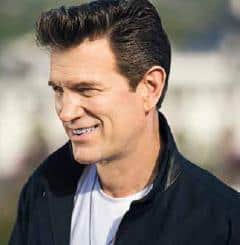 We sat down with Jeff McDermott to discuss the history of the annual gala and the impact that the fundraiser has on the Center’s outreach and education programs.

“This will be our seventh gala, and two of those previous [galas] were once two-night events where we would have the dinner portion at the Indiana Roof Ballroom in downtown Indianapolis, and the following evening, we would have the Hall of Fame induction, performances and after-party at the Palladium,” McDermott recalled. “Once we got the festival floor donated, we were able to have the dinner portion and the entire program all in one night and all in the Palladium.”

The funds generated from the annual gala support the Center’s educational programs, such as Peanut Butter & Jam, KAR Front Seat, Artist Outreach, Dance Discovery Series, Musical Images of Indiana, Science of Sound and several other classes that are available to children and the public. The funds allow the Center’s staff to build upon the existing catalog of programs and to expand upon it. Attending the gala is a fun-filled way to support the Center’s initiatives while enjoying a star-studded, elegant black-tie affair with a few hundred of your closest friends and colleagues. 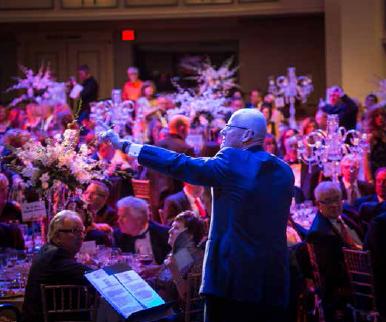 “When we put in our festival floor, it creates a unique atmosphere within the Palladium that people who don’t attend the gala rarely see,” McDermott shared. “We can sit hundreds of people for dinner on the festival floor, which rests above the orchestra seats, turning the entire hall into a dinner theater.”

“We’ve got a great lineup of inductees this year in our Great American Songbook Hall of Fame, which has become a traditional part of the gala evening,” he said. “Jimmy Van Heusen is a songwriter who many may not recognize, but they have certainly heard his songs. He wrote a vast majority of songs that were performed by Frank Sinatra and many others. Rosemary Clooney, the late great performer, will also be inducted. We’ve got a special sentiment for her for a variety of reasons. Rosemary was like a second mother to Michael Feinstein, and her daughter, Maria Ferrer, is a member of the Great American Songbook Foundation’s board of directors. And Marilyn Maye, who is in her early 90s and who performs hundreds of shows a year, will accept her HOF award and will also perform live.”

McDermott shared that Maye is believed to hold the record for the most appearances on “The Tonight Show” with the late Johnny Carson.

“We’ll have Chris Isaak performing as the headliner this year,” McDermott confirmed. “He follows Kristin Chenoweth who performed last year. It’s kind of a new format that we’ve instituted in the last couple of years. We had Storm Large perform the year before that, and we are constantly coming up with new ways to make the gala new and different by bringing in new headliners every year who add a different dimension to the gala.”

The gala attendees will enjoy a live auction with four or five spectacular excursions or “experiences” to bid on. Following the induction, dinner and performances, attendees who have purchased tickets to the after-party will enjoy several bands, food and beverages throughout the Palladium into the late night hours.

“There’s a sense of excitement that surrounds the evening because there are so many aspects of things going on,” McDermott concluded. “Every year, we add new touches and surprises, and I can guarantee some surprises for this year.”

Under the theme “Swinging on a Star” – a tune written by Van Heusen and famously performed by Clooney – the Songbook Celebration begins with the 5 p.m. First Merchants Bank Cocktail Reception and continues with an elegant dinner in the concert hall, live auction, program and after-party.

Tickets for the after-dinner portion of the evening are available at the Palladium Box Office, online at TheCenterPresents.org or by phone at 317-843-3800. Starting at $100, the tickets include gallery or box seating for the 8:30 p.m. Songbook Hall of Fame induction ceremony, followed by Isaak’s headline performance as well as admission to the all-inclusive after-party with dancing and complimentary drinks and desserts in three uniquely themed rooms from 10 p.m. to 1 a.m.

Tables seating 4-10 guests for the entire evening are available for purchase by emailing Sheila Morone at SongbookGala@TheCenterPresents.org.