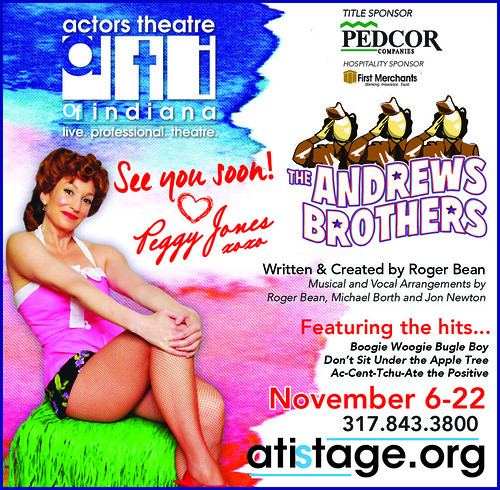 Film aficionados of the 1980 movie Blues Brothers fondly recall when Jake and Elwood declared their intentions to their soulmates and former musical teammates their burning desire of “getting the band back together.”

Indeed, Jake and Elwood were on a mission to bring back the band that featured members such as Mr. Fabulous, Blue Lou and Bones. They predicted their goodwill goals could be reached if the band got back together and performed Sweet Home Chicago, Rubber Biscuit and other famed blues tunes from the Chicago streets.

“We’ll put the band back together, do a few gigs, (and) there’s some bread,” claimed Joliet Jake in the movie. “Bam, five thousand dollars.”

In November, there will be another homecoming of sorts at the Actors Theatre of Indiana in Carmel. Co-founder Don Farrell has corralled the entire cast of actors, singers and dancers from the 2011 performance of the Andrews Brothers to perform at the Studio Theatre in the Center for the Performing Arts. Andrews Brothers runs from November 6-22 (www.atistage.org).

And here’s a warning to first-time viewers of the musical: expect side-splitting, silly humor that has been praised by the Los Angeles Times and other unbiased reviewers for its “no holds-barred goofiness.”

Those are sweet assessment to Farrell, who also recruited director California David Engel to again sit in the director’s chair stage for the return engagement at the Studio Theatre. “There are no villains or bad guys,” said Engel, who sports a Mickey Mouse shirt before a recent early evening rehearsal. “This is a feel good show. It makes you happy and the show blows the roof off.”

Those who witnessed the 2011 performance apparently agreed with critics. During a recent survey of ATI patrons, Farrell and partners Judy Fitzgerald and Cynthia Collins were told that the hometown audience wanted to see Andrews Brothers return to the Carmel stage.

“It was exciting to hear that people wanted the play to return,” admitted Farrell. “They are familiar with the play and have an affinity for the cast.”

The storyline from Roger Bean of the 2008 script revolves around a fictional USO show during World War II that was scheduled in the South Pacific. The legendary Andrews Sisters were slated to sing and perform to the American troops their hits Boogie Woogie Bugle Boy, Slow Boat to China, Don’t Sit Under the Apple Tree and additional songs from their fabled jukebox hits.

But the sisters were quarantined and sidelined shortly before the performance by contracting the chickenpox. The show marched onward when three stagehands – all disqualified from active service because of disabilities — stepped forward and dressed in drag as the Andrews sisters. The caper spins wildly as the story unfolds on the stage. 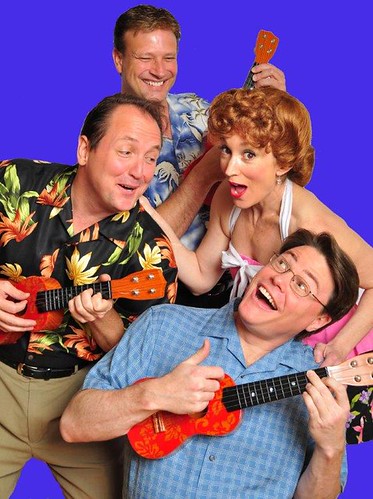 The Times reviewer noted that Bean “understands that drag still packs a punch.”

Farrell applauds the work from Engel, who played a major role in the creation of another musical hit, Forever Plaid. That play ranks as the most produced off Broadway performance in the last 25 years. Engel has also performed on stage as one of the stagehands.

“David has impeccable vision,” said Farrell. “Why would we not bring David in? He knows this era (the 1940s) so much that you would think he lived during this era. He does a lot of little things that makes it work so well.”

Part of the wisdom from both Farrell and Engel was bringing back the original Carmel cast of four, including Farrell (Patrick Andrews). Also returning from 2011 are local talent Jay Emrich (Max Andrews), Californian Michael Dotson (Lawrence Andrews) and the vivacious Mary Jayne Waddell of Rochester, New York, who plays Peggy Jones, a popular pin-up legend who helps corral the three stagehands into credible replacements for the sisters.

“There is synergy and chemistry with our cast,” said Farrell.

And there is Engel, in charge of threading the elements of the show into a performance that incites both toe-tapping and giggles.

“It is a real crowd pleasing show,” said Engel. “The spirit is great and there is a lot of heart and romance about the show. The first act is not quite as funny, but the second act has screaming laughter from the gut of the audience.”

Better fasten up, folks. There could be a whole lot of shaking going on at the Performing Center for the Arts in November.