Ale in the Family 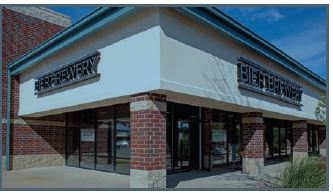 Shortly after Darren Connor arrived at Indiana University as an 18-year-old freshman, he called his father, Jerry, back home in Carmel with what might be considered a question about investing. “Do I buy a fake ID, or do I buy a beer kit, so I can make my own beer?” recalled the elder Connor. The decision to buy that beer kit more than 20 years ago began a beermaking journey that led the Connor family to recently open their second Bier Brewery & Taproom at 13720 N. Meridian St. in Carmel’s Meridian Village Plaza.

Jerry, co-owner of Bier Brewery, explained that Darren parlayed that early interest in beermaking into a job with the Bloomington Brewing Company for four years while still in school. Then after 10 years at Great Fermentations in Indianapolis as its main brewer, Darren and the Connor family felt the time was right to go into business for themselves.

“My wife and I and a couple of other relatives always thought that if [Darren] had the cojones, we’d have the interest,” said Jerry. And the family-owned and operated Bier Brewery & Taproom was born, opening its first location eight years ago at 5133 E. 65th St. in Indianapolis. “We’re here because of him. We’re here because of his expertise and his quality of work.”

That quality of work is exemplified by the dozens of awards that cover the taproom walls. “No other brewery or brewpub has the number of award-winning beers that we have,” said Connor. “We are the most decorated brewery in the state for Indiana state medals.”

Bier Brewery’s brewing philosophy is simple. “Every day they come in to brew, Darren would always say this is going to be the best batch he’s ever brewed,” said Connor. Asked if Darren has lived up to that daily promise, Connor throws a casual glance over his shoulder to the 70+ trophies and says, “Look at the wall.”

Bier Brewery in Carmel brings the same relaxed, kick-back atmosphere that has come to define its original location. “Collectic” is the word Connor uses to describe the eclectic mix of comfy, overstuffed couches and mismatched tables and chairs – often donated by regular customers. It’s all designed to create a sense that the taproom is an extension of your own living room. A fair amount of reclaimed wood plays a big part in the décor as it does at the 65th St. location. All the tap handles are made from wood remnants, and the Carmel bar is made from wood salvaged from an early 19th century barn in Tipton.

“Another thing that we’re excited about is Sarah bringing her chalkboard art to Carmel,” said Connor. Sarah Buschmann is Bier Brewery’s Indianapolis taproom manager and creative director. But she’s probably best known for the intricate and colorful chalk art she creates every week on the chalkboard above the taps. She draws her inspiration from local events or national stories of interest. Her homage to Burt Reynolds’ Cosmo centerfold after his recent passing was especially impressive. She says she’s looking forward to seeing the people that will become the new “regulars” in Carmel. “This is very much like a ‘Cheers’-y type place where we know a lot of the loyal customers,” she said.

Two major differences distinguish Bier Brewery’s Carmel location from the taproom in Indianapolis. First, the size. The space in Meridian Village Plaza is twice as big, allowing for an area to host private events and parties, and the bar is double the size and includes seating. And second, it’s family-friendly, offering finger food and space for families with young children. Jerry says there are also plans for live entertainment periodically and maybe even comedy night, something they’ve been doing at the original location for some time. “The nice thing is, depending upon what the neighbors want, we’ll do it,” he said.

Carmel residents Chip and Pam Edgington were regulars at the original Bier Brewery and are now managers of the new location. “We adopted Chip and Pam into the Connor family,” said Jerry, reiterating the familial nature of the business, which also includes his younger son, Ryan. “Chip and Pam had been coming into the brewery for many years,” said Connor. “I made a comment to them that I’ve had multiple customers come and say, ‘Hey, if you guys ever expand, let us know because we want in.’ And Chip said, ‘You better stop right there because we want to do this.’” Connor plans to use the Carmel shop to support neighborhood charities and local churches as he has done with the 65th St. taproom for many years.

Everyone’s welcome at the new family-friendly Bier Brewery & Taproom in Carmel. But if you want to buy beer, don’t bring a fake ID.