All Aboard the Indiana Railroad

However, the business of trains continues to prosper in the 21st century, partly through the efforts of Zionsville resident Thomas (Tom) G. Hoback. A third-generation railroader and former president and CEO of the Indiana Railroad Company (INRD), Hoback’s passion for trains didn’t cease when he retired in 2015. He continues to serve on INRD’s board of directors. Hoback and his wife, Sue, spend time traveling the globe via train as often as possible. They also enjoy the views of the countryside from the comfort of their own train car, the Santa Fe 56.

Hoback’s story begins with his father, Glenn Hoback, who was the chief dispatcher for Santa Fe’s Illinois Division at Fort Madison, Iowa. Hoback traveled more than 100,000 miles with his father on Santa Fe streamliners and locals before Amtrak emerged. He later graduated from Golden Gate University in 1969, where he majored in transportation and minored in economics.

After graduation, Hoback became an economics analyst for Western Pacific. Later, he joined the Illinois Central Gulf Railroad Company as the director of coal marketing. Then he acquired 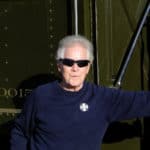 ICG’s nearly defunct Indiana line and formed the Indiana Railroad Company in 1986. He and his team transformed it into what became a model for the new American regional railroad.

After the interstate highways came along and air travel became more efficient in the 1960s and 1970s, many people thought railroad companies would disappear. The federal government subsidized the construction of airports and air traffic control systems while railroads still competed as a regulated industry, he explained.
“Railroad companies lost a lot of business [during this time] and then after they were deregulated in 1980, they began running their railroads like businesses again. They started to implement more technology and became a lot more aggressive with marketing. It’s been an extraordinary turn-around story in the last 30 or 40 years for the railroads,” he said. Today’s railroads move nearly half of everything transported in the U.S.

“During our first five years in business, INRD doubled in business and doubled again in the five years after. We grew INRD to a 500-mile route system,” he said. The company moved over 15 million tons of coal last year, which was only half of its total business.
“Looking back, the last 30 years have been a good ride,” Hoback said. But his days of riding the rails are far from over. He purchased a railroad car, the Santa Fe No. 56, from a San Francisco friend. It was one of 12 cars that the Santa Fe Railway purchased from Pullman Company between 1918 and 1928 for use by the railroad’s senior executives. The car is 81 feet long, weighs 180,000 pounds, and still has the original Pullman light fixtures and brass racks. The car can comfortably travel and is authorized to operate at speeds up to 110 mph on Amtrak’s rail system.

While it was in excellent condition when Sue and Tom Hoback purchased the car in 2004, it needed some restoration. Tom brought the car for refurbishing to the Indiana Railroad Company’s Senate Avenue shop in Indianapolis. INRD’s skilled electricians and mechanics took great care to replicate the original Santa Fe 1950s décor including the interior fabrics, shades and curtains. The dining room was

outfitted with the original china featuring Mimbreno patterns created by Mary Jane Colter and flatware with Reed and Barton’s Embassy pattern.
The car is modernized with the best accommodations for rail travel. The kitchen boasts stainless steel appliances including a refrigerator and full-range stove. Guests of the Hobacks rest well with luxurious comfort on mattresses from locally renowned Holder Mattress Company. The car also has an office and observation area for travelers to work or relax in.
Sue Hoback likes to travel through Canada and especially Halifax. “Halifax is absolutely gorgeous,” she said. “I love to go when their fall season begins. I remember a trip that we were on, heading to Hudson Bay, and Tom asked the staff of the railroad company we were traveling on if it would be possible to eat our dinner in our room. They were more than accommodating and brought us our dinner with lit candles. They were all about the customer service and the customer experience. I do enjoy traveling by train. If you can go that way, it is very pleasurable.”

“I have probably traveled well over half a million miles by train on six continents and at least fifty countries,” Tom Hoback said. “I particularly like traveling in Switzerland and western Europe because the scenery is so extraordinary. There is so much to see.”
Both Tom and Sue emphasize that trains give travelers opportunities to experience countries, cities and mountainsides that they can’t experience from 30,000 feet in the air. It gives them a chance to slow down, strike up a conversation, and take in the bigger picture. As best-selling author Anna Funder wrote, “I like trains. I like their rhythm, and I like the freedom of being suspended between two places, all anxieties of purpose taken care of: for this moment I know where I am going.”