A Peek at the Proscenium’s Progress

As we wrap up another year in the city of Carmel, we spoke with Carmel Mayor Jim Brainard and Henry Mestetsky, executive director at Carmel Redevelopment Commission (CRC), to discuss the progress and updates on one of the city’s most unique developments. It is completely reshaping the former Party City lot and, for those who remember way back when, the former site of Long John Silver’s (most recently Arby’s) that once sat on the corner of Carmel Drive and Range Line Road. We are, of course, discussing The Proscenium.

We first asked the mayor how the state of the city is faring as we begin Q4 of 2018.

“The condition of the city of Carmel is excellent,” Brainard said. “We’ve got great economic development, our public schools are excellent, and our parks and street tree programs are making a real and positive impact on the community. We are one of the few suburban communities in the country with a walkable downtown and a tax base that keeps our taxes low in perpetuity. We have extremely low utility rates compared to our neighbors and anywhere else in the country.”

When asked where the development is with The Proscenium, Brainard replied, “The Proscenium project is proceeding along. In fact, the foundation of the parking deck has been poured.” 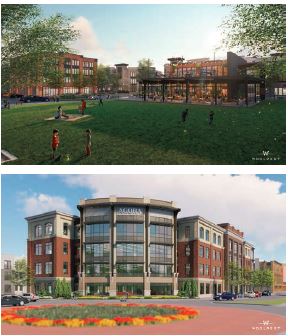 The $60 million mixed-use development will boast high-end amenities, including a restaurant/tavern alongside public green space – Carmel’s own variant of a “Tavern on the Green” concept, if you will. The Proscenium will have a commercial and residential component to it, appealing to both Boomers who are looking to downsize and Millennials who want to live in the central core in Carmel.

Tony Birkla, Principal at Anderson Birkla Investment Partners, confirmed that one of the buildings on the site will have around 30 condos. Mestetsky said that the proposed condos should start in the upper $300,000 price point.

“All of the deals that I’m working on, we are pushing for condo components in all of them,” shared Mestetsky. “People want to live here, and not all want to live in $2 million houses. The challenge will be keeping the price at a range that is comfortable for most buyers.”

Mestetsky expressed the importance of quality developments and construction that have and continue to reshape the city, and The Proscenium is no exception to that high standard that the city and its departments have set for developers, future and existing.

“Developers know that if they’re building in Carmel, they’ll be held to high standards,” emphasized Mestetsky. “Everyone is held to a very high standard in terms of what is constructed. That applies to both interiors and exteriors. The facades are important as well. We’re not here to subsidize the developers. We’re here to push them to their limits because everyone benefits from the product next to yours being just as high quality as yours.”

Mestetsky spoke about how the traditional development model typically works and why developers in Carmel are different from others in their industry.

“The way that developers make money quickly is they build the least expensive structure that a city allows them to build, and once they fill it with residences for companies, they sell the building off to the buyer, take their money and then they go. That kind of developer doesn’t care what the building looks like or how it stands up in 20 years. The developers in Carmel are different. They are headquartered here and are building to stay, building to hold. You get a different level of quality when the developer is based here and is building for the future.”

Mestetsky said that developers who build in Carmel know that their office space is going to be leased, and their residential units are going to get leased. “The developers hold [their properties in Carmel] because they know the value of what they own is not going to go down,” he added.

“This kind of developing/building doesn’t typically happen in the suburbs. We’re used to seeing it along Michigan Avenue in Chicago where you find parking underground, but it’s revolutionary that it’s happening here [in Carmel].”

The Proscenium site will be sitting on a one-level parking deck that will not be visible from Range Line.

“That is one of the most exciting things to me, and there will be plenty of room to park,” said Mestetsky. “The Proscenium is really in a perfect location for both residential units and offices because of its walkability to several restaurants and a grocery store, access to the Monon, the Range Line ‘road diet’ and all of the other improvements that have already been made. There will be several new restaurants, including a tavern amenity on real grass that will be unique. I’ve privately spoken with a couple of entities that would like to make that site their headquarters as well. There is not another project like this anywhere in Indiana.”