A Century of Civic Theatre 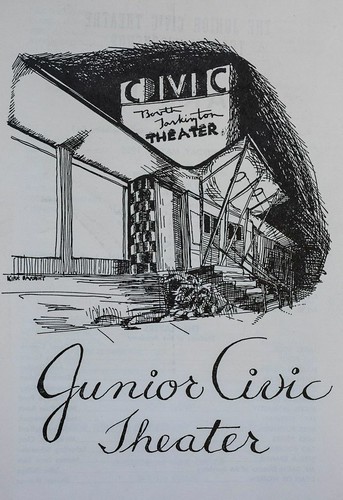 In 1914, a volunteer-based theatre, the Little Theatre Society of Indiana, comprised of Indianapolis citizens was established. The following year, the Little Theatre presented four plays in the sculpture court at the John Herron Art Institute. S. A. Eliot was named artistic director and world-renowned author Booth Tarkington wrote several original plays for its stage.

In 1929, the Little Theatre adopted a new name: Civic Theatre of Indianapolis. The name was changed to Booth Tarkington Civic Theatre of Indianapolis, Inc. in 1949-50 as a tribute to the famous Hoosier’s artistic contributions to the theatre as a playwright and advocate, although the name Indianapolis Civic Theatre was later adopted. In 1973, with a generous gift from Grace Showalter, the Theatre relocated to the 645-seat Showalter Pavilion on the grounds of the Indianapolis Museum of Art (IMA). IMA later bought out the Civic’s lease and Civic relocated to the campus of Marion College (now Marian University).

The Center for the Performing Arts, built in 2009 and 2010 after years of meticulous planning, presented Civic Theatre with the opportunity to relocate to a permanent home just north of greater Indianapolis. Thus, the Center’s 500-seat proscenium stage was named for Civic’s namesake, Booth Tarkington. Civic began the 2011-2012 season as the principal resident theater at the Center, where it continues to conduct all performances, education programs, and administrative functions.

Mainstage productions take place in the Tarkington Theater and range from acclaimed musicals to comedies and dramas, entertaining nearly 40,000 patrons each season. Civic’s enrollment in their education and outreach programs has tripled in their home at the Center for the Performing Arts and overall service to the community has grown from approximately 35,000 individuals to 50,000 per year. The Booth Tarkington Civic Theatre has been a vital part of central Indiana for a century, providing outstanding live entertainment and unmatched opportunities for professional, avocational and educational growth.

To kick off their centennial celebration, Civic will unveil a remarkable exhibit on April 16 commemorating the last 100 years of the their history. This exhibit, which opens to the public afterwards, will showcase the Civic’s archives that include Western Union telegrams from Cole Porter, correspondence from Franklin D. Roosevelt and a plethora of photographs, playbills and other fascinating memorabilia. The exhibit will be located in the lobby of the Booth Tarkington Civic Theatre in Carmel. Patrons who go to see the spring production of “SPAMALOT” or the Jr. Civic musical “Alice in Wonderland” will be able to enjoy this exhibit.

“On June 13th, we will have a Jr. Civic and Young Adult Program Education Fundraiser during our production of Alice in Wonderland, which is performed by kids for kids,” Catherine Dixon, director of development said. “It will be a fun event with lots of different levels for people to participate in the fundraiser. Junior Civic instructors and performers will provide the entertainment. Our final event will be the Centennial Gala on June 20th at the Booth Tarkington home on 42nd and Meridian. It will be a black-tie event and the ticket prices will be $250 a ticket and there will be sponsorship opportunities for this event.”

The Civic’s Executive Director, John Hedges, spoke about the Civic’s vision looking towards the next one hundred years.

“What Civic Theatre brings to a community is essential,” Hedges said. We don’t necessarily give people the means to live but we give them a reason to live. Some of the larger objectives that we are after really do make us matter in the community. We’re an organization that brings something tangible to the community. At its best, theatre is a place where you go to experience a shared sense of your own humanity. By literally and figuratively walking in somebody else’s shoes, you start to imagine life from other people’s perspectives. We are more than an entertainment venue. We become a part of a solution to some of the larger problems that we have in our society like domestic violence, racism, homophobia and you can go on down the list of issues. The theatre is about bringing people together and finding what is common among us as a human race.”

For more information about the Civic Theatre’s Centennial Celebration, productions, education and outreach programs, please visit their website at civictheatre.org