It has been an incredible 20th season for the volunteers, vendors and patrons of the Carmel Farmers Market (CFM) and another great year of events and fellowship for the books. As the season winds down, there is still much to do at the market and a smorgasbord of late summer/early fall products to purchase from all of your favorite vendors. 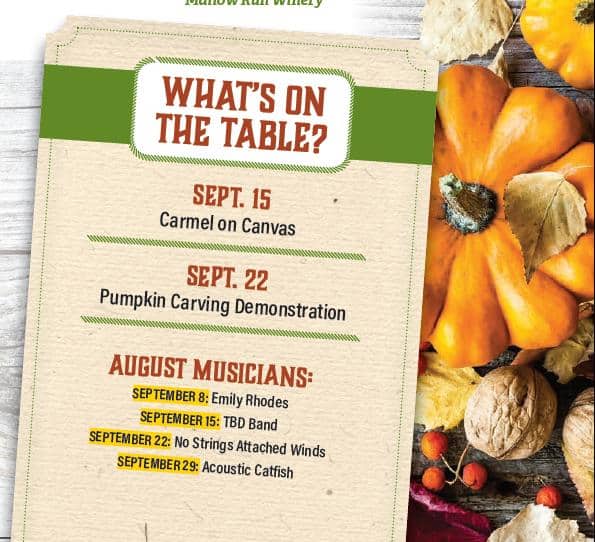 As many market-goers know, the month of September would not be complete without a pumpkin carving demonstration by Carmel resident and CFM volunteer, Lee “Punkin Lee” Saberson. Lee is a retired electrical engineer and a graduate of Purdue University.

Lee moved to Carmel from Whitefish Bay, Wisconsin. His interest in carving began about 30 years ago when he and his wife, Barb, lived just two blocks from the Great Pumpkin Festival that is hosted by the Whitefish Bay Civic Foundation every October. Lee and Barb continue to travel north for the annual tradition where he continues to enthrall the festival-goers with his giant pumpkin carving skills.

There, Lee developed his passion and carving skills from the local master pumpkin carvers. Lee explained that the festival is a huge event for kids and families and draws in scores of people. “The city buys 1,000 pumpkins for the kids. The pumpkins are set up on bleachers and picnic tables, and once the pumpkins are all carved and placed, they are lit up.”

Barb added, “They used to be lit with candles, but now they use [LED] lights.” 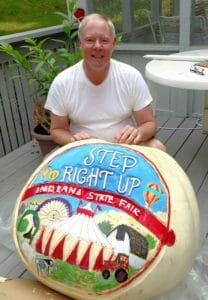 Over the years, Lee has participated in several demonstrations, including at the Carmel Farmers Market, and has carved and sculpted countless pumpkins, some as large as 1,200 pounds. Through the magic of his large cache of carving tools, he has transformed ordinary pumpkins into goofy, lovable, enchanting creatures and animals. The boundaries of pumpkin carving are limited only by one’s own imagination, though there are some structural guidelines that need to be considered when cutting into a pumpkin.

I had the honor of working alongside Lee for a carving demonstration at his home in Carmel where I picked up some important tricks of the trade. His “toolbox” was a collection of modified fruit knives, hacksaws and several typical household items, such as potato peelers, ice cream scoops, toothpicks, skewers and swimming pool noodles; those are used to prop and secure the pumpkins, especially when transporting them.

When it comes to keeping your carved pumpkin, Lee has some useful tips that he will share at the upcoming event if you want to display your pumpkin for Halloween. “I have a few methods that will help keep them a little bit longer. Temperature is very important.” Barb added, “It depends on the weather, but some people will keep their pumpkins in the air conditioning. Some years, it’s not as hot around Halloween, so they can keep their pumpkins outside longer.”

Lee has also used dry ice, but it is important to keep that out of reach of young children.

In addition to the Carmel Farmers Market event, Lee has carved for Sullivan Hardware as well as Dull’s Tree Farm in Thorntown, Indiana, where he gets most of his pumpkins. He has also exhibited at the Indiana State Fair. He has visited local area schools along with his church group and has done demonstrations with kids during their lunch breaks too.

Lee got involved with CFM about 10 years ago when he attended a volunteer meeting and told Ron Carter, president at CFM, that he would like to do an event at the market. “I had heard that the market used volunteers, so I attended a meeting, and I asked Ron if I could do a carving event. And he said, ‘Sure.’ We have since created the International Guild of Pumpkin Carvers, and Ron was our very first member. We now have a handful of members, and members are identified as ‘Punkin Ron’ and I am ‘Punkin Lee.’”

Having completed a pumpkin carving under the guidance and instruction of “Punkin Lee,” I am hopeful that I have completed the induction criteria and will be awarded the title “Punkin Janelle” in time for the event at the market.

“As you carve them [pumpkins], you learn a little bit more each time,” Lee said. “I like doing the ears. I focus first on the eyes and then the mouth. The parts can easily become 3D. I usually do just a couple of dots or cuts for the nose. The other subtle things you can do is create ‘pumpkin dimples’ or add some tiredness or 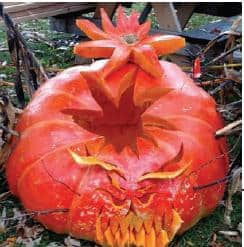 wrinkles to the pumpkin.”

Lee can carve and sculpt a 1,000-pound pumpkin in about five minutes with the myriad of tools that he has and the level of skill that he has obtained over the years.

“Dragons are easy, but my favorite new thing is carving a fish,” he said. “You draw a fish and cut it out, and however you lay out the pumpkin, you have the outline of the fish. And then you put the cutout of the fish on skewers, and it floats.”

Lee and I carved a large Atlantic Giant pumpkin. They have a thicker rind than the standard field pumpkin but are much easier to carve. Lee is a member of the 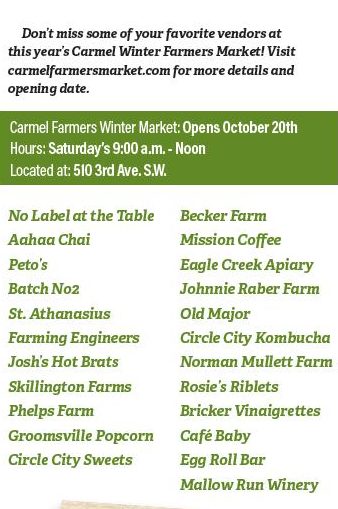 While pumpkin carving and sculpting has become an “addiction” to Lee, the pumpkin carving event at the Carmel Farmers Market has become a beloved tradition for many market-goers and their families. Please attend this year’s event and help us wrap up another amazing summer at the market while welcoming another Indiana fall season.

Visit carmelfarmersmarket.com for more details on vendors and upcoming events.