Accompanying the collection is one of its curators who happens to have been a long-time friend of Dali’s, Madame Christine Argillet. Not only will Argillet be sharing her amazing collection of Dali’s art, but also her unique stories and perspectives about a man and his art she knew well since she was a child. Her memories will bring Dali’s art to life for attendees of this spectacular exhibit.

Argillet has been touring across North America with this collection that she inherited from her father, Pierre Argillet, an accomplished 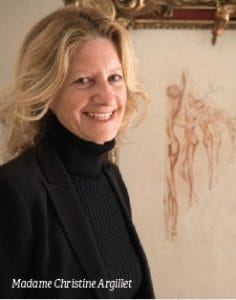 journalist, photographer, and publisher of Dali’s for more than three decades.

This museum-quality presentation of original etchings, Aubusson tapestries and original watercolors has also toured in galleries around the world, including a recent show in Singapore. The collection’s next stop will be at CV Art and Frame in downtown Zionsville.

Excited to share this renowned collection with her clients and local art enthusiasts, the owner of CV Art and Frame, Barbara Jennings, spoke about what it means to exhibit such an extraordinary collection of art in her gallery.

“After spending over 30 years in the art business, beginning with bringing a distinctive level of quality, custom framing to Zionsville, it is rewarding to become recognized for the phenomenal level of artwork that we are now presenting,” Jennings said. “I have always enjoyed being able to provide artwork by today’s most talented artists to our clients, but to be able to give art collectors the ability to acquire truly authentic, original works by master artists is deeply satisfying. I am enthused to meet and spend time with Salvador Dali’s close friend and confidante, Madame Argillet, who will be curating this upcoming show with us. And what a bonus to also be able to offer works by the other Spanish Masters – Picasso and Miro.”

We were granted an exclusive interview with Argillet where she shared the intimate history of her father’s relationship with Dali as well as her own personal memories of the man whose collection she curates. In 1934, Dali met Pierre Argillet with whom he began a friendship that spanned five decades. Argillet became Dali’s friend, confidante, and publisher. They created the Dali Argillet Collection that art historians have termed “the finest bodies of the Master’s Art.” The Argillet Collection is unequivocally the most authenticated collection of Dali’s work. The Pierre Argillet Collection demonstrates high standards of quality, and the works have appeared in some of the world’s most prestigious museums: Musee Boymans, Rotterdam; Musee

Madame Argillet describes this exhibition as “A tribute to the work of my father, Pierre Argillet, as an extraordinary publisher of the Dada and Surrealist group. This collection reflects a constant endeavor and a close collaboration with the artists of these two movements, especially Salvador Dali. My goal is to have this collection presented in the finest museums and galleries in the world.”

Pierre Argillet was an avid collector of works by Futurists, Dadaists and Surrealists, meeting with the major artists of the 20th century. Argillet commissioned Dali to illustrate: Greek Mythology; Hippies; Poems by Ronsard; Secret Poems by Guillaume Apollinaire – 1967; Poems by Mao Tse Tung; The Venus in Fur by Sacher Masoch; and Faust of Goethe. Dali’s delirious vision led to a long and fruitful collaboration between artist and publisher resulting in almost 200 etchings. 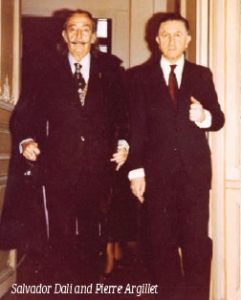 “My father was born in 1910 and was from a humble family,” Argillet said. “He had a strong taste for literature and philosophy. My grandmother sent him to study in Paris where he was exposed to the arts. He connected with the surrealists, and when the Second World War arrived, many artists went to New York. In the mid-1950s, many artists returned to Paris, and he reconnected with many of the surrealists. He worked with some of them before he met Dali. My father had such a wonderful friendship with Dali,” Argillet recalled. “He put aside working with other artists and worked only with Dali which was quite unusual for a publisher at that
time.”

Argillet described the process of her father and Dali’s commissioned work and how the limited technology, the geographical distance between them, and Dali’s spontaneous behavior would sometimes create conflict between the two men.

“Dali would call my father in Paris and to get a line between Spain and France would take up to six to eight hours,” she said. “My father would stand next to the telephone and wait to be connected. Dali would tell my father that he had his commissioned plates ready and my father would immediately run to the train station and take the next train to the south of France. He would then drive to Dali’s house which was very close to the French border. He would arrive at Dali’s home only to find that Dali had sold the plates to a couple passing through. He would then tell my father, who was furious, that ‘I will do you a better print.’ This happened a couple of times throughout their relationship.”

During her summer vacations, Argillet and her parents would stay near Dali’s home for two
months while Dali worked on his commissioned pieces for Pierre Argillet.

For fifteen years, this was how Christine Argillet spent her summer breaks and over the years became close to Dali and his wife, Gala. Argillet developed a priceless collection of memories that she shares with interested enthusiasts along her tour. It is often said in the art world that: “Salvador Dali was the creative genius…and Pierre Argillet was the publishing genius.”

In 1974, Dali and Argillet decided to end their professional relationship but remained close
friends until Dali’s death in 1989.

“My father and Dali had some incredible projects together, even after my father stopped publishing for him,” Christine Argillet stated. “My father organized Dali’s first exhibition in Moscow in 1988.”

Despite the Kremlin’s rejection of Dali’s politics and the nature of his art, hundreds gathered in
lines outside of the Pushkin Museum of Fine Arts to see 200 pieces of Dali’s work.

Dali in the Eyes of Christine

“Dali, from the very early age of three or five, was already an artist who drew in a magnificent way,” she shared. “He had grown up with a very sophisticated and cultural background in Spain. At the age of nineteen, he was already exhibiting in galleries next to Goya and Picasso. Dali had a fantastic imagination and creativity. He linked his childhood and bad memories in his work.
They did not stop him but were tools in his creativity. He had a very unusual imagination and expression of dreams. He would often paint with a brush with one hair. So, he had this fabulous tool and he had the imagination. At the age of 30, he already had solo exhibitions and had his
first solo exhibition in New York in 1934.”

Argillet describe Dali as being very dependent on his wife, Gala, who would say that “Outside of drawing and painting, he doesn’t know how to do anything else in life.”

“His wife had been a very important person in his life and in his own words he would say, ‘I would have never survived without her,’” Argillet said. “He was absolutely unable to take care of himself to the extent that when she became ill and passed away, he became ill and couldn’t take care of himself. He passed away in 1989. Gala was the structure in their relationship.”

Argillet said that Dali was very much a “prankster” with a contagious sense of humor and that his humor is often found in his work. As guests would enter the living room, they would notice a long silver stick and a turtle on the floor with an ashtray on its back. Dali’s “moving ashtrays” were always a hit.

“In his work, there is imagination, but there is also a lot of humor and freedom,” she said. “We tend to forget the humor in his work,” Argillet emphasized. “Humor helps a lot of things, and it is a very elegant way to say difficult things. He also included different cultures in his pieces. He liked to put different cultures together, have them meet and correspond.”

Argillet pays homage to her father’s wish of showing the Dali Argillet Collection “in places where they are unexpected.” 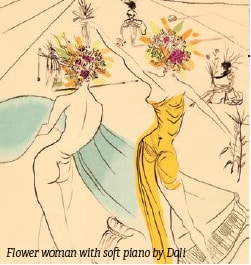 “My father passed away in 2000 at the age of 92,” she shared. “I wasn’t quite sure what to do with the collection. You never own art. It is something that you enjoy in life and it accompanies you on your journey. I would like some of the collection to be in good museums and, of course, I will keep some, but I like to share the collection, and I feel very happy to do this. Instead of having them in a vault where nobody would seem them, I am following my father’s advice to show the collection in places that is not always expected and where people can connect with our collection which is part of a body of Dali’s work that is not as well known.”

The collection will be on exhibit from May 6-14. Appearances by Madame Christine Argillet on May 12th and 13th are complimentary, but require an RSVP. For more information on the upcoming Dali Argillet Collection exhibit schedule at CV Art and Frame, email info@cvartandframe.com or call 317-873-2976. 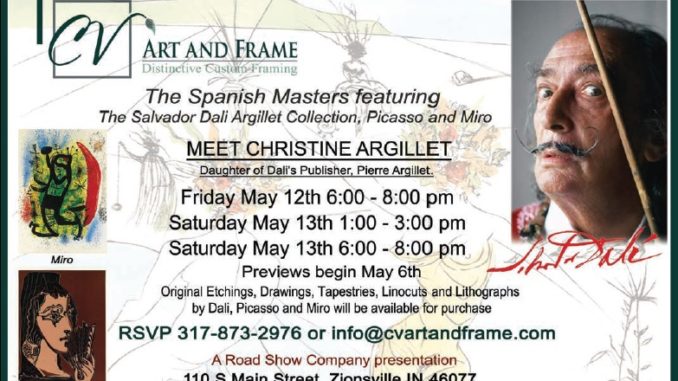